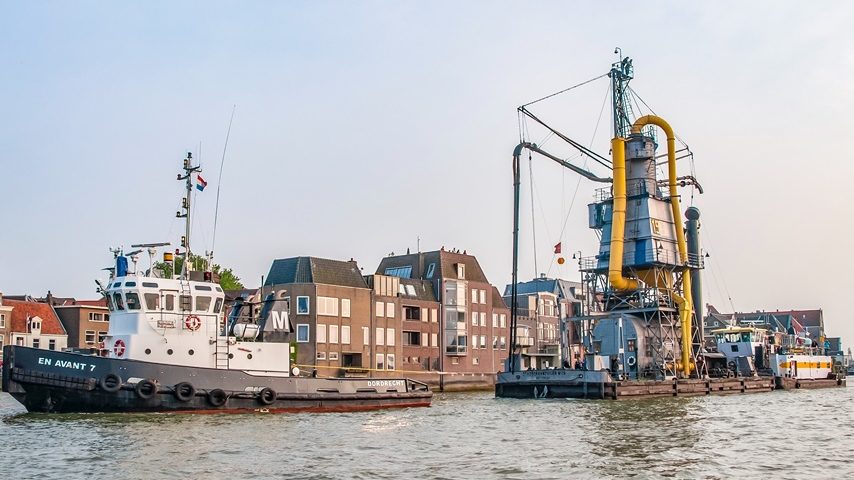 The company Rederij T. Muller was founded in 1918 by Teunis Muller.  After the first World War there was a lot of smuggling going on and the company was very active to prevent this smuggling.

in the beginning of the twenties the company was very much involved in  towing hopperbarges to the “Ruhr” in Germany and to “Zeeland”.

A few years later the company started working more and more for dredging companies. They were very much involved in de “Zuiderzeewerken” in 1933.

In 1936 the company was selected to transport and swim in all bridge sections for the “Moerdijk” bridge.

During the 2nd World War Teunis tried to hide his tugboats for the German in the Biesbosch”.

However, the Germans found and confiscated them. The tugboats had to work for the “Kriegsmarine’ and after the war the were found in Hamburg.

After the 2nd World War they started to rebuilding Holland again. All bridges were blown up and they had to be replaced. Rederij T. Muller became a specialist in transporting and swimming them in, f.e. The “Moerdijk” bridge, Zaltbommel, Deventer, etc.

At the same time they were still working for the dredging companies, closing the Brielse Maas in 1951 and the Braakman in 1952.

In 1953 we had the big flooding disaster in Holland and the government started the “Deltawerken”, a plan to build a network of dams and dikes. Muller as very much involved in this, towing all kind of dredging equipment.

In the seventies the dredging companies did not have very much work anymore in Holland and the went abroad for dredging work. At that time The Rederij T. Muller started to work for oil & gas companies, doing inland and harbourtowage for them. Mid seventies the oil & gas industry was booming on the Nordsea.

In 1983 they took over “Hak Zwaar Transport” and so they became involved in the field of heavy (water) transportation with heavy lift barges, pushboats  and other heavy lift equipment.

In 1987 they took over all harbourtowage activities from Smit in the port of Dordrecht and Moerdijk.

The nineties is the era where Muller starts to operate more and more international en becomes a company with international allure.

In 2010 they were also awarded with the icebreaking contract on the “IJsselmeer”, to keep the IJsselmeer open for inland transportation. Since the foundation the company has been involved in icebreaking for riverauthorities, portauthorities cities, etc.

At the moment Muller is an international operating company specialised in the following fields:

Muller works for well know international companies, is having 101 employees on the payroll and in revenue time they work with appr. 150 people total.. The fleet consist out of 10 tugboats, 2 pusher tugs, 17 barges and a lot of heavy lift equipment.

With the 4th generation in the company Muller has the intention to grow. However, they do not want to become the biggest, but for sure the best!