Taking the next generation to the next level 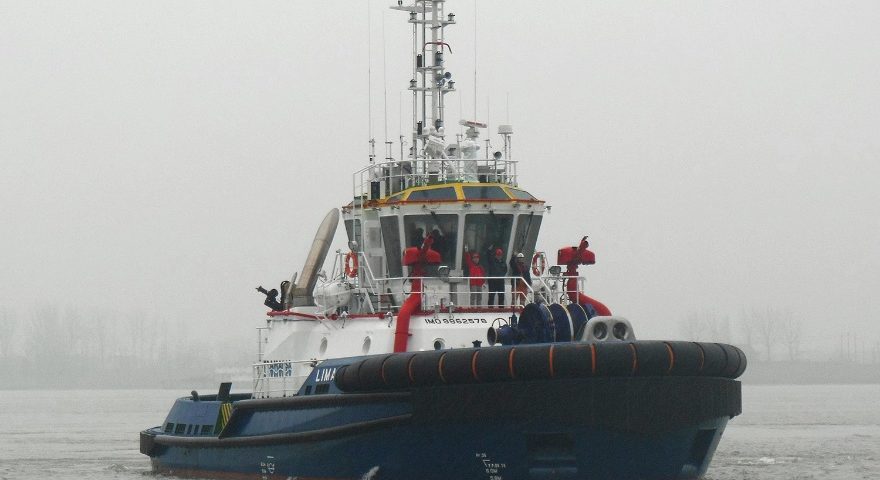 Jiangsu Wuxi Shipyard delivered the ship-assist tug Lima, a Robert Allan Ltd. RAmparts 2400-W design to TRAMARSA in Peru recently. The new vessel is named after the Lima Civilization, which was established long before the Inca Empire and is also the name of the capital and largest city in Peru today. Lima is a sister of her precursors Chincha and Tupaq which were delivered by the same builder in 2016.

The Particulars of tugboat Lima are:

The tug was designed and constructed to ABS Class requirements with the following notation:

Average/maximum trial results were as follows:

The vessel has been designed to the highest standards of outfitting for operating crew of up to ten. The Master and Chief Engineer’s cabin along with galley and mess are located on the main deck.

The tug has been outfitted for safe and efficient performance of ship assist, harbour towing and fire-fighting. The deck machinery comprises a W-Rig hydraulic hawser winch / windlass on the bow, spooled with 2 x 110 m line on each drum, a towing hook and a knuckle-boom deck crane are provided on aft deck. There are two four – crew cabins in the lower accommodation deck, as well as washer and drier and storage shelving.

Main propulsion for the tug comprises a pair of Caterpillar 3516C, EPA Tier 2 certified diesel engines, each rated 2240 bkW at 1800 rpm, and driving a Schottel SRP 490FP Z-drive unit with Ø2800 propeller. The tug is fitted with a Fire Fighting 1 system with a 2,760 m3/hour FFS pump driven by the port main engine front end power take off via gearbox and clutch.

The electrical plant consists of two identical Caterpillar diesel gen-sets, each with a power output of 76 ekW.

Ship-handling fenders at the bow consist of one tier of 900 OD x 500 ID cylindrical fender at the forecastle deck level and 480 x 300 W-block fenders below main deck level. The same type W fender is used at the stern and 300 x 300 D-fender along the sheer lines of main deck.