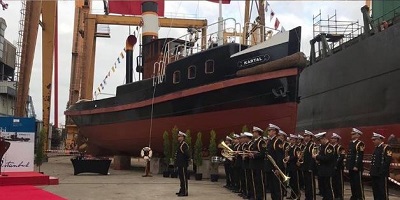 The Kartal Steamboat, on which in 1918 Mustafa Kemal Ataturk gave his famous proclamation “They will leave just as they came” referring to the invading countries, has been restored and delivered to the Navy for exhibiting in the Naval Museum.

The story: The restoration of the 107 year old Kartal Steamboat (tugboat) on which Atatürk gave the first signals of the forthcoming Turkish War of Independence has been completed. On November 13th, 1918, when the Allies occupied Istanbul, Mustafa Kemal Ataturk stood on the deck of the Kartal Steamboat making his famous declaration “They will leave just as they came.”

Exactly 100 years after Ataturks declaration an organization created for the purpose of rescuing and restoring the Kartal Steamboat has delivered the restored tugboat to the Turkish Navy to be put on display as a memorial ship. The ceremonious delivery of the tugboat to the Navy was made at the Istanbul Cicek shipyard where the restoration also took place.

The tugboat was discovered in 2016 left abandoned and half sunk. The restoration which began on November 13th, 2017 was completed in just one year thanks to the cooperation of many individuals and companies. The tugboat has been restored to its 1918 state. After the delivery ceremonies, the Kartal Steamboat went to the Sea museum in Besiktas, Istanbul to be put on display as a memorial vessel.