Damen Shipyards Group has won an order from maritime services company EMS Offshore Service GmbH & Co. KG for a Shoalbuster 2711. The 2711 is the latest addition to the popular Shoalbuster range, having made its debut in June this year. Damen had the vessel in stock and, following the fitting of additional equipment to optimise it for its duties, will deliver it in January 2020.

The vessels in Damen’s successful Shoalbuster range are exceptionally versatile, shallow-draught workboats. In the 25 years since the introduction of the Shoalbuster, Damen has continuously fine-tuned the design in response to changes in market requirements and regulations.

The new Shoalbuster 2711 takes this process a stage further with design changes that enable it to comply with new MLC regulations stipulating additional accommodation capacity. By increasing the width of the existing Shoalbuster 2709 by two metres, Damen has boosted the accommodation capacity from six to seven personnel. Added benefits from the extra beam include an increase in the area of the aft deck that allows the accommodation of two 20ft containers, while enhanced stability increases the lifting ability of the deck crane to 5.5 tonnes @ 18.5 metres.

With the vessel having additional buoyancy compared to its predecessor it can carry more and heavier equipment on the increased deck space, and the bollard pull at 45 tonnes is greater than it would otherwise be as the extra beam means it can be fitted with larger, more powerful nozzles. Finally, it also achieves anchor handling notation as the extra stability allows it to handle bigger and heavier anchors. 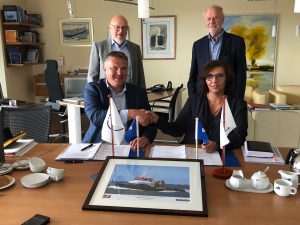 These advantages, together with the 24-metre load line length, make the Shoalbuster 2711 a particularly attractive proposition, offering a highly competitive alternative to larger vessels with similar capabilities.

The additional adaptations required by EMS Offshore will take place at the build yard, Damen Shipyards Hardinxveld, and Damen is also offering after-sales servicing and spare parts support designed to ensure maximum uptime and reliable operation. EMS Offshore will use the vessel primarily for transport and installation and maintenance works in shallow waters such as the Baltic and North Seas.

“We are very pleased that EMS Offshore has approached Damen for the purchase of this Shoalbuster 2711,” said Remko Bouma. “Our ability to deliver such a versatile vessel at such short notice was a significant factor in their decision and we are confident that its characteristics make it ideal for operations in the North and Baltic Seas.”

“EMS Offshore Service is currently expanding its activities in the Baltic area,” said managing director Michaela Buscher. “Our shareholders’ companies have worked with Damen for many years already. Accordingly, when we were looking for a strong, flexible tug boat for a project with a new customer, Damen’s Shoalbuster 2711 turned out to be just the right choice for our purposes. With its 18 tonnes crane, the two 45 tonnes towing winches and space for two TEU on deck, it is able to transport and handle the respective cargoes. It will also enable us to offer a number of anchor handling and salvage operations to further customers, too. We look forward to the latest addition to our fleet.”