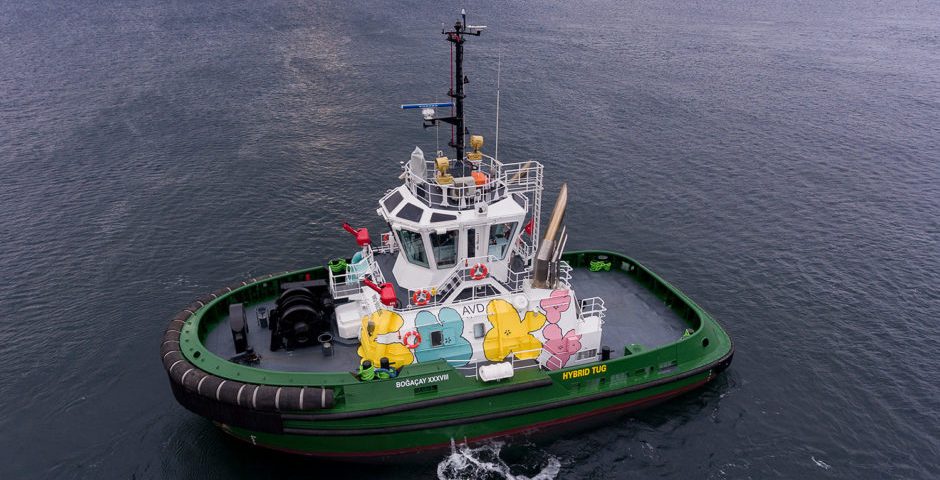 On the 11th of January 2020, Sanmar and Robert Allan Ltd. celebrated the commissioning of the 200th tug built by Sanmar to a Robert Allan Ltd. design. Achieving this milestone in just over 25 years is remarkable, and a true testament to the close working relationship developed by these two prominent businesses in the international tug market. The success of Sanmar in rising to such prominence in the world tug market reflects their unwavering commitment to the highest standards of modern shipbuilding, resulting in tugs of the highest quality available anywhere in the world. This achievement also reflects the fact that they are building well-researched designs of the highest quality from Robert Allan Ltd., a world-leading designer in this demanding sector. A private ceremony between the two organizations will be held early in the New Year to mark this special occasion.

The 200th tug is itself a reflection of the desire of both companies to continue to move the goalposts for advanced tug designs. The Boğaçay XXXVIII is the latest evolution of the highly successful RAmparts 2400-SX design, incorporating the newly developed CAT Advanced Variable DriveTM (AVDTM) hydro-mechanical hybrid propulsion system. At the time of writing the tug is joining Sanmar’s towage fleet in Izmit Bay, Turkey.

Boğaçay XXXVIII has been painted with a bright green hull and colorful flowers on the deckhouse inspired by the famous pop artist Andy Warhol’s “Flowers” print. This regalia, reflective of the changing trend towards reduced environmental impact from tugs is bound to attract much attention in the usually moribund world of tugboat aesthetics!

The particulars of this new tug are as follows:

The vessel is classed by ABS with the notation:

The CAT AVD TM system consists of a pair of dual input, continuously variable transmissions, located in the shaftlines between the main engines and the Z-drives. The AVDs can accept power from the CAT 3512 main engines, rated 1765 kW at 1800 rpm and/or from two 435 kW hydraulic motors powered by a single CAT C32 auxiliary engine rated 1081 kW at 2100 rpm. The power is delivered to two CAT MTA 627 FP Z-drive units with 2.7 metre diameter fixed pitch propellers.

A primary advantage of the CAT AVD TM system is the continuously variable transmission which can modulate propeller speed down to 0 rpm like a slipping clutch. It can also spin the propeller up faster than would be possible if the engine was directly coupled to the drive, allowing the engines to operate in their peak efficiency zone instead of operating along the propeller demand curve at higher specific fuel oil consumption, thus resulting in significant fuel savings. With a FP propeller pitched for bollard condition at 0 knots, this feature enables full power to be taken from the engine when free running, much like a CP or DEP system.

It is noteworthy that with this system the engines are smaller than would normally be the case in a tug of this power (3512 vs. 3516 engines). The additional power to achieve maximum bollard pull comes from the C32 engine that also drives the Fi-Fi pump. The machinery configuration and power flow scenarios for the four operating modes are illustrated below:

The towing gear consists of:

The commissioning ceremony, which was held at Sanmar’s Altinova shipyard, was well attended by the Turkish maritime community and Turkish politicians including the Minister of Transportation.

“Innovation, Respect to Environment, Quality, Form, Function, Aesthetics and Art; all essential parts of this new tugboat and it describes Sanmar very well. We are proud that this boat is joining our fleet and improving the quality and efficiency of our operations in Turkish Ports” 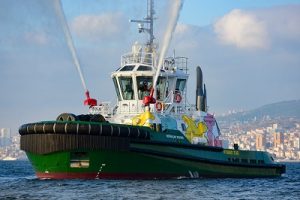 This “Twin Century” tug is certain to attract much attention in the tug world as Owners continue to search for viable alternatives to conventional propulsion systems which can offer high performance, improved fuel efficiency, and reductions in environmental impact.