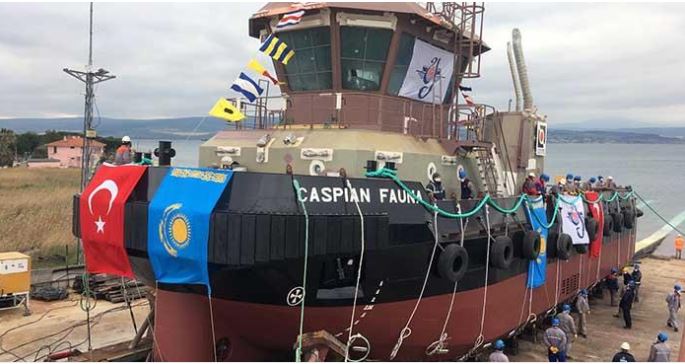 This ice-class tug, named Caspian Fauna, will be used for coastal towage and harbour operations once completed. It has an overall length of 30 m, beam of 11 m and minimum draught of just 1.8 m to access shallow areas in harbours, with accommodation for 10 people. Gelibolu Shipyard launched Caspian Fauna down its ramp at the end of April.

The shipyard will install two main engines with power ratings of 970 kW each. Combined these will produce 1,940 kW and 25 tonnes of bollard pull.

Gelibolu Shipyard will also outfit this tug with deck machinery, including towing winch and capstan, wheelhouse equipment and communications antennas.

Caspian Fauna is classed for unrestricted navigation, for anchor handling and with ice-class 1D.

This included an amendment covering the latest Intact Stability Code (IS-2008) for ships engaged in anchor handling, towing and escort or lifting operations which came into effect on 1 January 2020.

Seaplace used Sener’s FORAN V80R2.0 on another shipbuilding project outside of the towage sector, for detailed engineering of the structure, machinery and outfitting of cold storage ship Siuana Arctica. This was recently launched at the Zamakona shipyard, in Spain, and is currently in the final construction stage.

Sener’s full FORAN software can be used to develop every phase of a ship’s design and engineering in an integrated way and in a single database. According to Sener, this yields a considerable reduction in the delivery time and project costs.