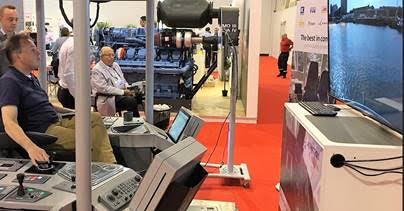 Kotug demonstrates the sailing of the first remote controlled tugboat over a long distance today. The
RT Borkum was controlled from the International Tug, Salvage & OSV Convention and Exhibition (ITS)
ITS in Marseille, while the RT Borkum was sailing in Rotterdam. A captain of KOTUG took over the
control of the tug via a remote secured internet line and camera images. These cameras and controls
of the tugboat were used on the demo consoles in Marseille. This project is a joint industry project by
the sponsors mentioned below. There was no external subsidy used.

KOTUG believes that unmanned remote controlled ships will be the first step to ultimately unmanned
autonomous shipping. Various simple operations in remote locations can already be done from remote
controlled stations. Kotug uses its Rotterdam simulator for further testing of unmanned operation tasks.
The real time sensor technology makes it possible to give the remote control captain the situational
awareness that is needed for safe operation. Combined with the drone technology to connect the
towline, unmanned shipping is commercially and technically getting closer.

Unmanned shipping does not yet comply with current rules and regulations. Therefore, rules need to be
amended before tugs can actually start doing their tasks fully autonomous.