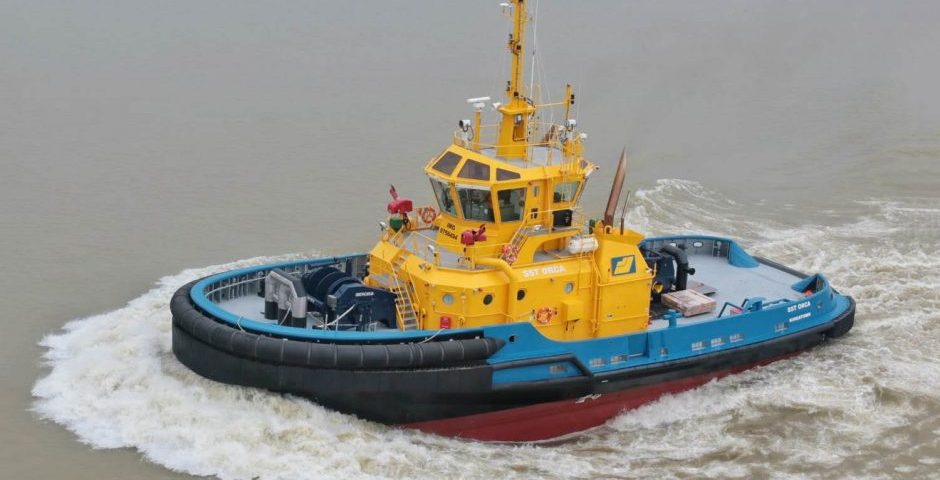 Robert Allan Ltd. is very pleased to announce that SAAM SMIT TOWAGE CANADA Inc. (SST Canada), a joint venture partnership between Boskalis of the Netherlands and SAAM S.A of Chile, has recently completed the purchase of two new RAstar 3200 escort tugs from Hong Kong’s Cheoy Lee Shipyards. SST Grizzly and SST Orca are due to depart Cheoy Lee’s Hin Lee shipyard next week, with arrival in Vancouver in early November of this year. Upon arrival, these two new escort-rated tugs will join SST Canada’s fleet and begin operations in the southern waters of British Columbia.

These state-of-the-art tugs will be capable of safely performing all ship-handling roles, including berthing, unberthing, and escort duties, and will considerably increase the ability of the local tug fleet to handle anticipated increases in vessel traffic through British Columbia’s southern waters, especially in the context of escort towing.

These new tugs will become both the largest and most powerful escort-rated tugs in the region, with bollard pulls in excess of 80 tonnes, and the ability to generate high indirect escort forces at speeds of up to 10 knots, namely 82 tonnes in steering, and 130 tonnes in braking. Complementing these impressive escort performance capabilities will be an equally capable double (split) drum 200 kW electric escort towing winch by Ibercisa with an active haul-in and pay-out constant tension system, as well as data logging for aiding with timing of replacement of the 72 mm (3”) diameter Amsteel Blue synthetic towlines.

The tugs are also both equipped with Ibercisa electric towing winches aft, spooled with 600 metres of 54 mm (2-1/8”) diameter 6×36 IWRC steel wire rope towline, thus boosting the capacity of the local tug fleet to rescue vessels and tow them to safety should they become disabled beyond where they would typically be actively assisted by escort tugs.

Specialized fendering systems designed to minimize contact pressures, along with folding masts both act to keep the risk of any steel-to-steel contact with assisted vessels with high flare to a minimum, while also assisting these vessels into terminals as gently as possible. A Fi-Fi 1 standard external fire-fighting system with waterspray and a 16 m3 foam tank, also makes these tugs very useful for terminal standby roles.

Other principal particulars of the new RAstar 3200s include:

The tugs’ full classification notations are as follows:

The electric deck machinery combined with the house loads are powered by a pair of 200 ekW Caterpillar C9 gensets, and the tug is also equipped with a smaller C4.4 harbour genset, rated for 51.5 ekW.

Comfortable MLC-2006 compliant accommodations are provided for up to ten crew members, although since crewing levels will be significantly lower for the vast majority of operations as a sub-500 GRT tug, single occupancy cabins will generally be available to the crews. The tugs also feature well-appointed mess/lounge and galley spaces, and a dedicated space for wet gear immediately adjacent to the entry lobby which will help to keep the interior spaces dry and tidy in the notoriously wet environment on the west coast of Canada.

As SST Canada’s second acquisition of RAstar 3200 tugs this calendar year, these tugs represent another vote of confidence by SST Canada in this series of multi-functional, high-performance escort tug design by Robert Allan Ltd. With its unique sponsoned RAstar hull form and underwater appendages designed specifically for generating and sustaining maximum escort forces, the RAstar 3200 is an ideal platform for escort duties where performance is paramount, while retaining an operator friendly tonnage of less than 500 GRT. With their optimized dimensions, these tugs are also capable of performing a large range of secondary roles that maximize their versatility to tug owners and their clients.

When launched, SST Grizzly was coincidentally also Cheoy Lee Shipyards’100th tug  to a Robert Allan Ltd design. This will give SST Canada the very unique distinction of owning two milestone Robert Allan Ltd tugs, with the other being Uzmar Shipyard’s 100th tug, a RAstar 3200-W design which is currently under construction and due to arrive in Vancouver in early 2019. The Uzmar build will be homeported at SST Canada’s northern base in Prince Rupert, BC, Canada, where it will provide escort and other ship-assist services to a growing number of vessels and terminals in that region as well.

Cheoy Lee Shipyards meanwhile continues to build more Robert Allan Ltd designed tugs both as part of its speculative building program and also for specific clients worldwide. This speculative building program includes further iterations of the RAstar series, with several recent builds currently available to prospective clients, as well as multiple tugs of the RAmparts series. Cheoy Lee Shipyard’s order book and momentum continue to be very strong, and another major milestone may well be within reach in late 2019 should a 150th Robert Allan Ltd designed tug be completed.