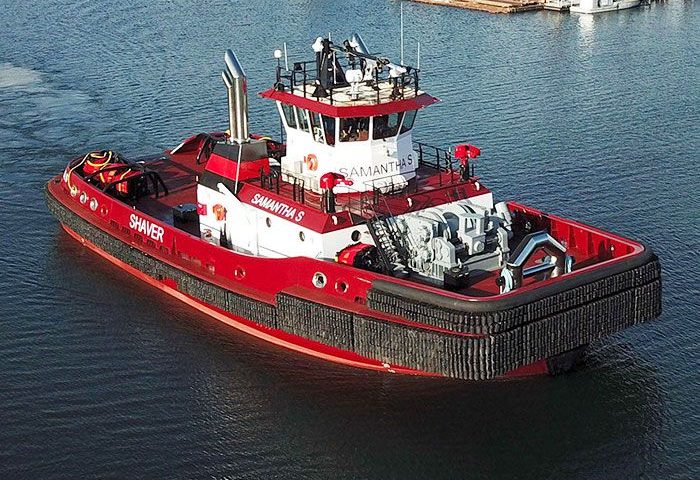 Built at the Diversified Marine shipyard in Portland, OR, the multi-purpose tug ws operating along the West Coast.

Measuring 112 ft x 44 ft and with a 22 ft draft, the tug was built for escort, ocean towing and ship assist, and has firefighting capabilities if needed. It features a raised pilot house and a squared forward end. It has an enhanced fuel capacity of 108,000 gallons for offshore and rescue tows and accommodations for up to 10 crew members.

The tug’s large, flat bow allows it to come up flat against the transom of ocean-going ships in the Columbia River. It is equipped with two wire winches forward, and six aft, for hard wiring to the stern of large ships for escort, all eight are Wintech 120-ton (SWL) winches. Other deck machinery consists of one Rapp HA-149H-250 escort winch; and a Rapp double drum AHTW-75H-165 tow winch.

The engines are rated at 4,218 HP each, and will provide enough power to develop an estimated 230,000 pounds of bollard pull.

The fire pump and the two fire monitors are provided by Fire Fighting Systems U.S. agent, Inmar Systems. The firefighting system has the capability to pump more than 12,000 gallons per minute to fight marine and near shore fires.

“The size and special features of Samantha S demonstrate our ability to provide agile, efficient vessels for a variety of requirements,” said Bryan Nichols, director, business development, Jensen. “This tug is the latest multi-purpose escort, ocean towing and assist tugboat to hit the water from our diverse design portfolio which includes all types of workboats from 55-foot push boats to 225-foot anchor-handling tugs.”