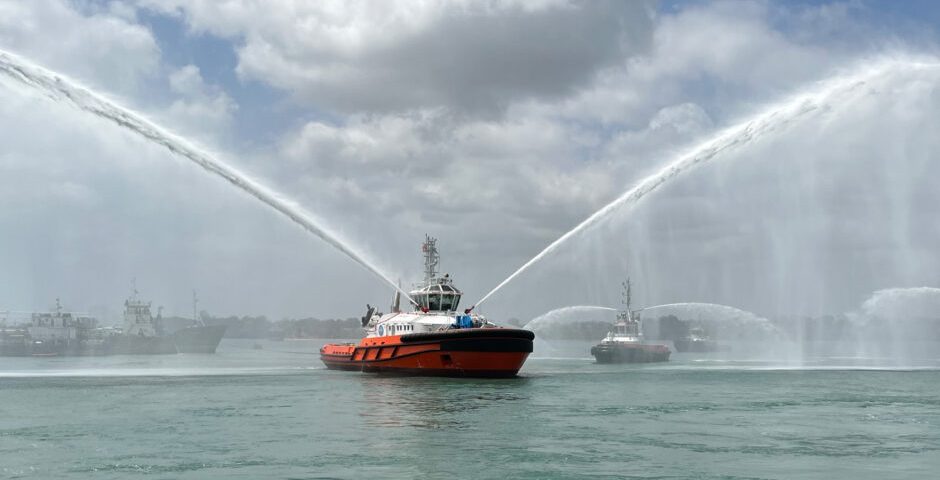 Robert Allan Ltd. is pleased to announce that Kenya Port Authority’s new RAstar 4200, Mwokozi II, has been delivered to her home port of Mombasa on January 10, 2022.

The Turkish shipbuilder Med Marine was contracted to build the new tugboat at its group owned Eregli Shipyard. The keel was laid on March 23, 2020, and construction was completed in November 2021.

The vessel is designed to operate in East Africa and Indian Ocean regions and can undertake international salvage and towage operations involving very large vessels.

The establishment of the IMO, Regional Maritime Search and Rescue Coordination Centre, within the Mombasa Port, prompted the management to recognize the need of having a sea going vessel with the capacity to perform salvage and successful search and rescue operations. The Kenya Ports Authority Managing Director approved the procurement of a newbuilt Salvage Tugboat christened Mwokozi II.

The name Mwokozi, means saviour and signifies the important role that the vessel will play for its owner. In recent years, the incidences of ships grounding in the Indian Ocean within Kenyan Territorial waters are becoming more and more common.  Within the Eastern and Northern seaports, there isn’t a country with the capacity to mount a proper sea salvage and search and rescue operation. The salvage operations will create a new revenue stream for the Kenya Port Authority and enhance their corporate image as a leading port along Western Indian Ocean Seaboard.

Key particulars of the Mwokozi II are:

The Mwokozi II was constructed to RINA rules with the following notation:

The vessel is SOLAS compliant for Gross Tonnage of > 1000.Accommodations are outfitted to high, MLC compliant standards for a crew of up to 18 personnel. The Master, Chief Engineer and Owner cabins are located on the main deck with eight double crew cabins located in the lower accommodations.

On the foredeck is a MacGregor MG HAT/GDG-30-1230U02272x2 hydraulically driven, split drum, towing winch accommodating 2 x 220 metres of 72 mm diameter synthetic rope and fitted with double gypsies and warping heads. The winch is equipped with a length and tension monitoring system with load indicating display in the wheelhouse.

On trials, the Mwokozi II exceeded performance expectations with the following results: