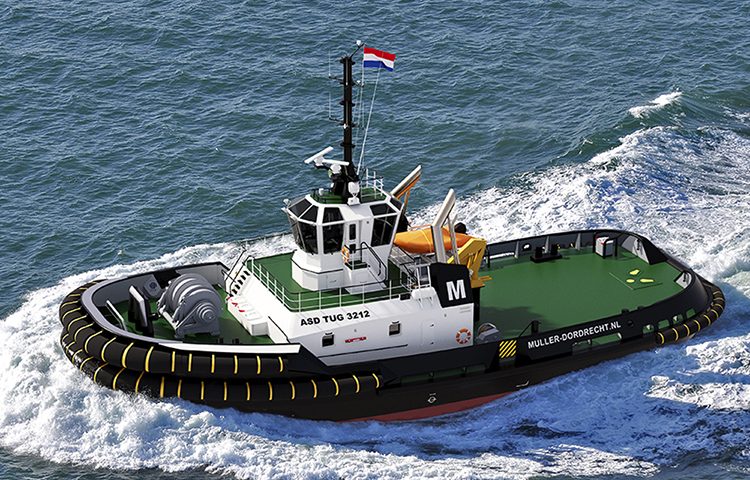 In a ceremony held on 22 August, Mr Kommer Damen, Chairman of the Damen Shipyards Group and Mr Bram Muller, CEO of Muller Dordrecht, signed a contract for the supply of a Damen ASD Tug 3212. Headquartered in Dordrecht in the Netherlands, Muller Dordrecht has a history of providing towage, emergency response and salvage, heavy transport and other services going back for over a century. Its decision to purchase an ASD Tug 3212 was based on both the vessel’s versatility and capability, and Damen’s ability to deliver it in a relatively short time.

With 83-tonnes of bollard pull, the 32-metre Damen ASD Tug 3212 has a well-earned reputation for being capable of operating effectively both in harbor and when undertaking offshore towage of large structures. Highly maneuverable and with excellent sea-keeping characteristics, the class also comes with a wide range of options to equip them for specific roles. Muller Dordrecht has opted for almost all of them, including the IMO Tier III after-treatment system for low NOx emissions, a large aft deck winch together with an open stern, hydraulic towline guide pins, a deck crane and a support boat. The winterization package for operations in high latitudes has also been specified, which includes additional insulation, heated windows and GMDSS A3 rated communications.

Despite the requirement to install all these additional features, Damen will be delivering the tug in just nine months. This is achievable due to Damen’s long-established policy of building certain popular models in anticipation of future sales, based on market intelligence and industry feedback. This enables customers to respond quickly to demands from their own clients. With an ASD Tug 3212 already in build at Damen Song Cam Shipyard in Vietnam, Muller Dordrecht can take delivery of the vessel it needs on a timescale that satisfies its counterparties.

On delivery, the new vessel will start work in the North Sea area, operating out of Rotterdam. There is a high level of offshore activity in the region, particularly in relation to renewable energy as well as O&G decommissioning. Day rates look to remain firm for premium workboats into the foreseeable future, not least because high-efficiency new vessels are in short supply and very much in demand.

The relationship between Muller Dordrecht and Damen goes back almost fifty years and in the past Muller Dordrecht’s fleet has included both Damen Pushy Cats and Multi Cats. Both companies have much in common, being family owned, sharing family values and headquartered not far from each other. However, this purchase represents the first new build contract in many years.

Mr Bram Muller, CEO of Muller Dordrecht, said at the signing ceremony: “After many years we are happy to be working together once again with Damen Shipyards. This ASD tug 3212 will strengthen our tailor-made solutions for our customers, not only offshore but also in-port.”

Joost van der Weiden, Sales Manager Benelux at Damen Shipyards Group, added: “We are extremely honored and happy that Muller Dordrecht has chosen an ASD Tug 3212 – one of our most capable tugboats – and that our two companies are once again doing business. Our shared company cultures with a forward-looking attitude and commitment to cooperation and sustainability makes us natural partners and bodes well for a productive future. It is a true pleasure to be able to deliver this vessel to Muller Dordrecht and we are sure that it will give many years of efficient service.”