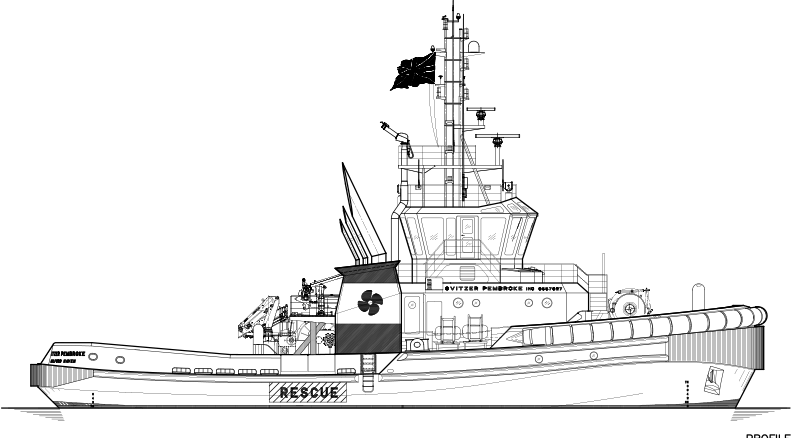 Svitzer Pembroke will strengthen Svitzer’s fleet and emergency towing capabilities in Milford Haven, while freeing up Svitzer Ramsey to support its London operations.

Svitzer, a leading global towage provider and part of A.P. Moller-Maersk, has today announced the purchase of a new tug to support terminal operations in Milford Haven, UK. The addition of the Svitzer Pembroke to the UK fleet will free up the 86-tonne bollard pull ASD tug Svitzer Ramsey for relocation to London to cater for expected growth at the River Thames and River Medway.

The Svitzer Pembroke was originally built for Svitzer at Zamakona Shipyard, Spain, but in 2014 the vessel was sold, and has operated under the name Boa Odin for the past eight years. The 100-tonne bollard-pull ASD tug has both aft towing winch and firefighting capabilities. This makes the Svitzer Pembroke uniquely suited to supporting Svitzer’s Terminal activities at Milford Haven and strengthens the existing fleet’s emergency response capability.

The arrival of the Svitzer Pembroke in Milford Haven allows Svitzer to redeploy the Svitzer Ramsey to London, where escort tugs with bollard pull from 80 tonnes and upward, plus fire fighting capabilities, are becoming increasingly important for serving customers effectively on River Thames and River Medway.

Commenting on the acquisition, Kasper Karlsen, Chief Operating Officer, Svitzer Europe and interim head of Svitzer in the UK said: “With the purchase of Svitzer Pembroke, we simultaneously accomplish two key goals. Increasing our minimum 80 tonnes bollard pull fleet in London from 6 to 7 tugs allows us to better meet current and future customer demands there. At the same time, we are able to strengthen our ability to provide emergency services and towing at Milford Haven. We are very pleased to once again have Svitzer Pembroke in our fleet.”

The newly reacquired tug has already arrived in the UK and will return to service in the coming months.

Svitzer currently operates more than 70 tugs in the UK and has around 650 employees. The UK has been the launching off point for the company’s EcoTow project, with Svitzer’s entire fleet London, Felixstowe, Southampton and Scotland switching to low carbon biofuels. The service is set to be rolled out across the remaining ports in the UK and across Svitzer’s global operations.