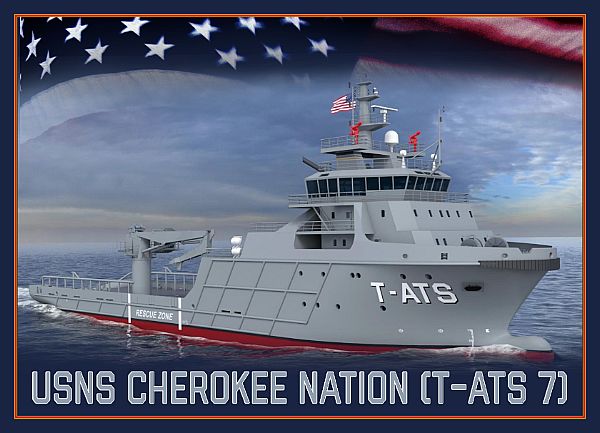 Secretary of the Navy Richard V. Spencer has announced the newest Towing, Salvage, and Rescue ship will be named Cherokee Nation in honor of the service and contributions the Cherokee people have made to the Navy and Marine Corps team.

“It is my privilege to announce that the many Cherokee Nation citizens who’ve served throughout the years will be remembered with the highest honor a Secretary of the Navy can bestow, the naming of a ship,” said Spencer. “The future USNS Cherokee Nation will expand our capabilities and form a critical backbone for the strength and readiness of our entire fleet.”

This is the fifth U.S. ship to be named in honor of the Cherokee people.

“The Cherokee Nation is extremely honored that the U.S. Navy is recognizing our tribal nation and the generations of Cherokee men and women who have bravely, and humbly sacrificed for our freedom today,” Cherokee Nation Principal Chief Bill John Baker said. “Our Cherokee people have contributed in every major battle and war ever fought in this country, and continue to serve in the Armed Forces in some of the highest rates per ethnicity. Cherokees are a strong, resilient people and we are privileged to have a US ship at sea that reflects both our country and tribe’s history and values.

Gulf Island Shipyards was awarded a $64.8 million contract option for the detail design and construction of the new Towing, Salvage and Rescue Ship, which will be based on existing commercial towing offshore vessel designs and will replace the current T-ATF 166 and T-ARS 50 class ships in service with the US Military Sealift Command. The future USNS Cherokee Nation is the second ship in the new class of Towing, Salvage and Rescue Ships and will be designated T-ATS 7.

The T-ATS will serve as open ocean towing vessels and will additionally support salvage operations and submarine rescue missions. The ship will be built at the company’s shipyard in Houma, Louisiana, and is expected to be completed in July 2021. 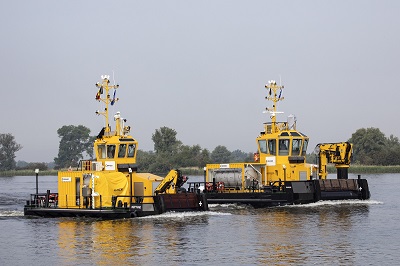