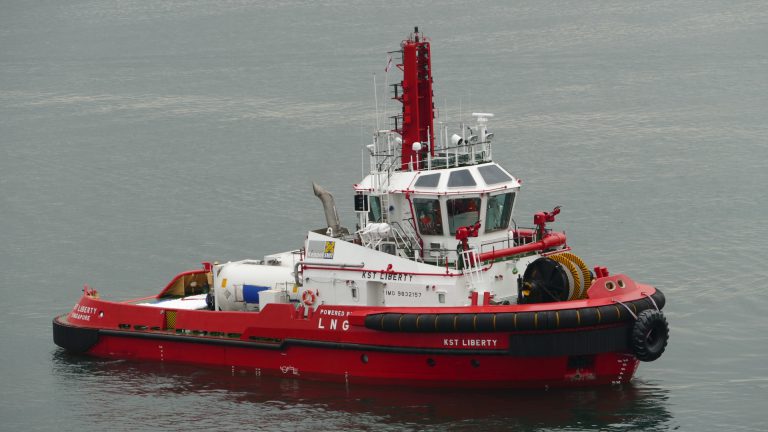 The shipbuilder said that the construction of the vessel and its delivery to Keppel Smit Towage are on track, with a perfect safety record.

“Today’s christening of KST Liberty marks an important milestone in Singapore’s journey to make LNG bunkering available at our port as early as 2020. I congratulate Keppel O&M and Keppel Smit Towage for taking the lead, under MPA’s LNG Bunkering Pilot Programme, to build and operate Singapore’s first LNG-fuelled vessel. Such partnerships bring us closer to our goal of cleaner and more sustainable marine fuels,” Loh Ngai Seng, Permanent Secretary at Singapore’s Ministry of Transport, said at the ceremony.

The LNG fuel is carried in containerized, type-C ISO-certified tanks on the main deck, and refueling can be done by truck to ship operations or replacing the empty tanks with replenished ones. It is one of the seven dual-fuel vessels the company is building at the moment.

“This is a state-of-the-art tug, with environmentally-friendly features that exceed the requirements of the International Maritime Organisation’s (IMO) global cap of 0.5% on the sulphur content of marine fuel that comes into force on 1st January, 2020. It will have substantially reduced CO2 emissions relative to traditional tugs and be a much welcomed green initiative,” Romi Kaushal, Managing Director of Keppel Smit Towage, added.

“KST Liberty will also increase our capabilities as the fitted LNG tanks will allow for extended harbour operations without the need for re-fuelling, enhancing operational efficiency. It is also more compact, compared to tugs of the same bollard pull, providing enhanced maneuverability.”

Shell will be supplying the LNG fuel to KST Liberty while FueLNG, a joint venture between Keppel O&M and Shell Eastern Petroleum (Pte) Ltd., will be providing the LNG bunkering services.