Damen signs with Ports of Jersey for Shoalbuster 2711 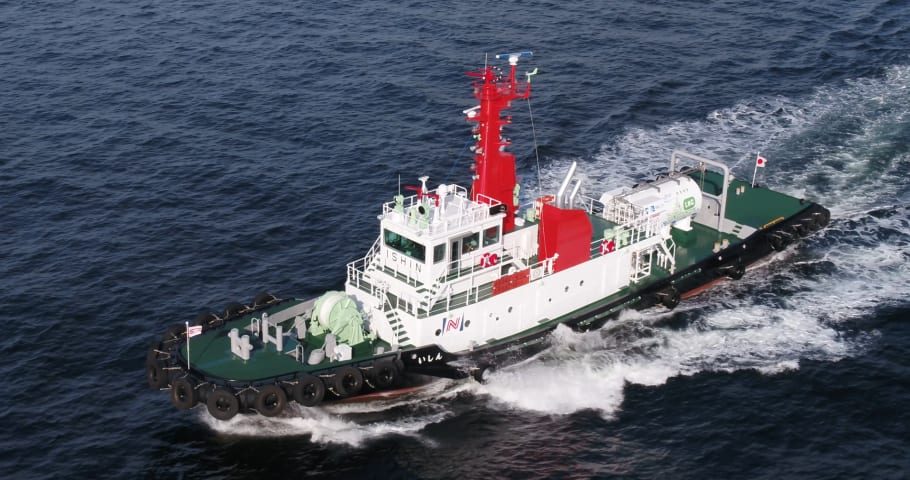 Osaka Bay’s first LNG (liquefied natural gas) tugboat, “Ishin” was completed at Kobe Port on February 27, 2019 and since March 2020, has been working in Osaka Bay and the Seto Inland Sea guiding large vessels in the area. The tugboat was completed by Mitsui O.S.K Lines., Ltd. (MOL) a major shipping company in Japan, less than two years after the decision was made to commence construction in 2017. Yanmar supplied two marine dual fuel engines (6EY26DF), as well as the fuel supply system which included the LNG fuel tank, buffer tank, and gas fuel device. Kanagawa Shipbuilding Co., Ltd., the largest tugboat manufacturer in Japan was involved in the construction, and Nippon Tug-boat Co., Ltd., a group company of MOL handles operation. MOL and Osaka Gas Co., Ltd. will establish the first LNG fuel supply system for ships in Osaka Bay at Sakai Senboku Port, and LNG fuel will be supplied truck-to-ship from an LNG tanker on the land side.

“This ship realizes our corporate philosophy of reducing environmental load, and was launched to meet the demands of the times for global environmental conservation,” said Koichi Yashima, Managing Executive Officer of MOL. “We would like to learn from the operation of this vessel and expand the LNG-related business.”

Tetsuro Nishio, president of Nihon Tug-boat Co., Ltd., which operates the tug said: “It is thanks to the efforts of everyone involved that we have got to this point. As a company, we will work as one to ensure the safe operation of the tugboat.”

Takehito Ikoma, president of Kanagawa Shipbuilding Co., Ltd., which built the tug said: “We’re a shipyard that has always been about work boats and we really came together as a company to build this vessel.”

Plans to build an LNG-fueled tugboat were discussed in earnest at MOL in 2014. Up to then, MOL had been considering various forms of propulsion, such as electric, hybrids, and CNG (compressed natural gas), under their concept of an environmentally friendly “eco-tug”. Following the decision to pursue development of an LNG-fueled vessel, the company focused on shortening construction time of the tugboat, considering the usual build time and issues of technical feasibility. “Ishin” was positioned as part of MOL’s advanced ship technology development project “SENPAKU ISHIN NEXT” and was named in September 2018 from the project name “Ishin”. The vessel is the first tugboat in Japan to be in compliance with the IGF code (International Code of Safety for Ships using Gases or other Low-flashpoint Fuels, effective January 2017), which stipulates safety requirements for ships using gas fuel and low flash-point ignition fuels. In addition, the ship’s biggest feature is that the LNG fuel tank is placed on the rear deck of the ship and is a removable structure, which improves convenience during fuel supply and maintenance inspection. In evaluation of this series of environmental improvements, it has received the highest rating of four stars in the “Energy Conservation Rating System for Costal Ships”, certified by the Ministry of Land, Infrastructure, Transport and Tourism. Over the 10 years since MOL launched this project it has widely shared its concept of shipping that incorporates environmental considerations and safety compliance, and the company proudly holds that “Ishin” is the embodiment of this project.

From January 2020, environmental regulations on ship fuels became stricter, with regulations on the sulfur content of ship fuels tightening, in all sea areas around the world. Yanmar focused on LNG, which has excellent environmental performance, and has been used in existing diesel engines since 2012 as a dual fuel engine (dual fuel engine) that can operate in both a gas mode with LNG fuel and a diesel mode with diesel fuel. Research and development commenced, based on the 6EY26 engine, and proceeded to commercialization by April 2016. A dual fuel engine that uses two types of fuel, LNG and diesel, requires advanced control technology. High-precision air flow control technology was introduced into the 6EY26DF, and by maintaining the engine in the optimum combustion state at all times, high reliability was achieved, and stable operation made possible. In the gas mode, NOx is reduced by about 80%, SOx, PM is reduced by about 99%, and CO2 is reduced by about 25% when compared with the exhaust of Yanmar’s IMO secondary regulation compliant diesel engine. the gas mode also clears the IMO tertiary regulation for NOx reduction.