Recently a ceremony was held at Damen Shipyards Hardinxveld, to mark the naming of the first of a new model in the Damen Shoalbuster range. The ultra-shallow, Shoalbuster 3514 SD was christened Brutus by Mrs Mandy Heere-van Eijk, on behalf of the leading tug and workboat company, Herman Sr.

As part of the ceremony Mr Jack van Dodewaard, director of Herman Sr, thanked the team at the yard for the great job that they did and for their achievements despite having to battle against the headwinds of the COVID-19 pandemic. To mark the occasion, Mr Van Dodewaard was presented with a scale model of Brutus by the director of Damen Hardinxveld, Mr Jos van Woerkum, after which the latter also presented a gift to Mrs Heere-van Eijk.

The Shoalbuster 3514 SD is one of the largest and most sophisticated in the range. A substantial and versatile working platform, it measures 35 metres in length, nearly 14 metres wide and has a free deck space of 150m2. With a draught of 2.85 metres at full tank capacity and just 2.45 metres at 50%, she is able to access waters inaccessible to other vessels of a similar size and capability. Four Caterpillar C32 ACERT engines deliver a total of 3,876 bkW (5,280hp) to four 1900mm nozzles, an arrangement that contributes significantly to her shallow-water capability. And with 60 tonnes of bollard pull, she also has powerful towage capabilities.

Among the many other roles which the Brutus will be capable of taking on are PLGR operations, ROV surveys and a 600 x 800mm moonpool for multibeam access, mattress installations, UXO clearance, mooring, pushing, dredging support, ocean-going towage and general offshore supply vessel duties. Other features include four-point mooring and she is also equipped for anchor handling with an open stern complete with roller. The accommodation is comprised of twelve cabins for six to seven crew plus thirteen to fourteen additional personnel.

Brutus will be deployed primarily for wind farm support and maintenance duties where her shallow draft will allow here to work near as well as offshore. The DP2 dynamic positioning system including ancillary thrusters will ensure precise position-holding on the open sea as well in the vicinity of turbines and other structures. Her open stern will also make the vessel suitable for cable-laying operations and a sturdy aft deck HS Marine knuckle boom crane will be capable of lifting a wide assortment of cargo and equipment.

“The Van Dodewaard  family, as Herman Sr B.V., are still very happy with the good and long term cooperation with Damen Shipyards,” said Jack van Dodewaard. “For nearly 75 years, and across three generations, they have been  our vessel supplier and we hope it will last for many more years. The fourth generation of the Van Dodewaards is taking over this year, with Erwin and Chris carrying on with the family business. I wish them good fortune and a healthy business for the coming years and hopefully they will also find their children willing to continue the cooperation with Damen and extend our fleet of Damen Workboats.”

“We are proud to have built our 14th Damen vessel to Herman Sr since we began our mutual cooperation more than 70 years ago in 1947,” added Jos van Woerkum. “The Brutus is the first diesel-electric Shoalbuster with hybrid propulsion in the range, with a shallow draft, dynamic positioning 2 and compliant with the latest IMO Tier III requirements following installation of a treatment system to reduce its emissions. These features are in line with current developments within the Damen organisation that aim to make it become the most sustainable shipbuilder in the world.

“The vessel’s features include a deck load capacity of 10 tonnes per square metre, a free deck space of 200 square metres and is equipped with a heavy deck crane and two powerful winches. With 60 tonnes of bollard pull we wish Herman Sr much success with this innovative vessel and look forward to continuing our close relationship into the future.” 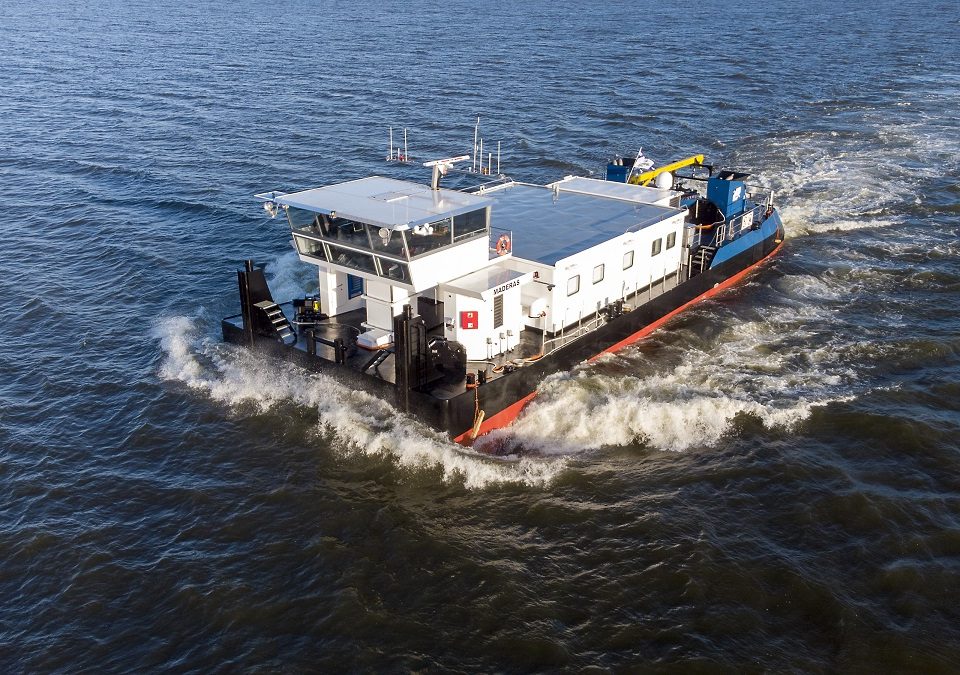