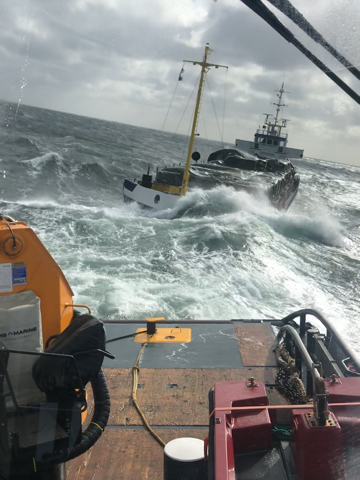 The 3.000 dwt  M/V “Roseburg”  was underway from the Baltic to Shoreham United Kingdom with a fully loaded cargo of timber including deck cargo when encountering serious engine problems which could not be repaired at sea to be able to continue her voyage.

On Sunday the 10th of March 2019 late afternoon the contract was signed between Landfall Marine Contractors and the owners of the M/V Roseburg to tow their hampered Lady from an offshore location at the North Sea towards Rotterdam.

The multipurpose anchor handling tug ISA, which was standby at the shipyard for maintenance, was immediately mobilized and set course towards the location of the M/V Roseburg.

All proper sea-fastenings were done on the ISA whilst sailing outbound on the River towards Hook of Holland as there was a proper North Westerly wind of 40-45 kn blowing and gusting 50-55 kn. All had to be firmly done and also all gear to be able to connect the M/V Roseburg was prepared on deck. This to make sure that all connecting can go as fast as possible and the crew of the ISA did not have to stay longer on deck in these harsh weather conditions longer than necessary, when connecting to the casualty!

Once outside the breakwaters of Hook of Holland the high seas came running out of the North West of an estimated average of 5 to 6 meters.

The location of the M/V Roseburg was roughly 45 nm North West of Hook of Holland and the next morning at day break the ISA arrived at the location. Once at location the ISA remained standby and closely monitored the situation. The entire crew conducted a decent risk- and job assessment, including the toolbox meeting where they exactly discussed the entire procedure how to connect to the hampered M/V Roseburg to the last detail. In order that everybody exactly knew the how abouts and what they exactly had to do when connecting!

The weather and sea state were still way to rough for the upcoming hours. The forecasts were showing light decreasing winds during the next few hours.

At mid-afternoon on Monday the 11th, there was a safe window to make the first attempt on connecting to the M/V Roseburg which unfortunately failed. The sea state was still very rough  during this attempt, immediately  a second attempt was made , which was successful.

With some excellence seamanship, enormous maneuver capabilities and an ultimately coordinated and cooperating crew, they had been able to safely connect and directly established a towing connection with the M/V Roseburg.

Tuesday morning the 12th of March, at 06:30 in the morning, the M/V Roseburg was safely moored alongside a quay in Rotterdam and another delicate challenge has been successfully completed. With all thanks to the crew of the ISA which did a hell of a job in these extraordinary circumstances.