Inaugural ceremony for the tugboat SAAM Itza was held in Guatemala 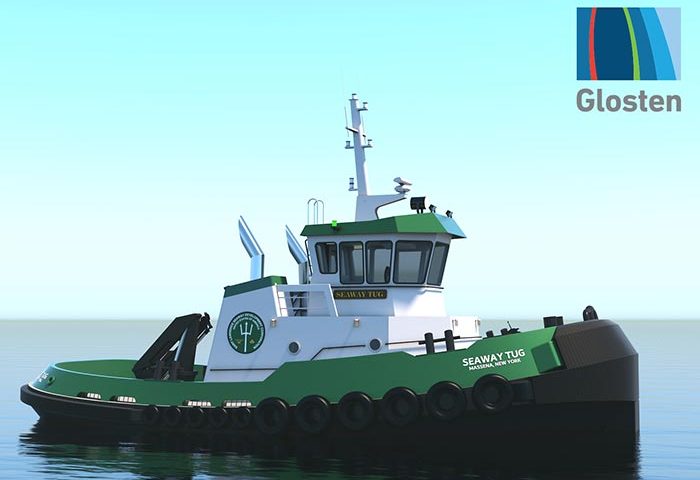 The HT-60, the smallest in the harbor tug series developed by Seattle based naval architecture firm Glosten, is slated for delivery in 2021.

“This new vessel will be used to carry out a variety of construction and maintenance duties for the U.S. portion of the St. Lawrence Seaway, including routine maintenance of lock gates, maintenance and positioning of aids to navigation, ice management, and removal of accumulated ice from lock walls,” said Craig Middlebrook, Deputy Administrator of the SLSDC.

The Glosten HT-60 is designed to capitalize on the operating advantages afforded by a broad bow form with a semi-raised forecastle deck and full visibility and winch controls from a single operating station in the pilothouse.

To perform its intended work functions in ice, the hull has been ice-strengthened to ABS Ice Class C0 standards. The Z-drive units are powered by a pair of EPA Tier 3 diesel engines turning carbon fiber shafts and delivering a combined 1,320 bhp at 1,800 rpm. At 60 feet in overall length, the tug is right-sized for maneuvering inside lock chambers, with a wide 28 feet beam to improve performance in ice and enhance stability for deck crane operations.

“Washburn & Doughty is proud to be selected by SLSDC to build its new Z-drive tug. We look forward to working with both SLSDC and Glosten on this exciting design,” said Katie Doughty Maddox, President of Washburn & Doughty.