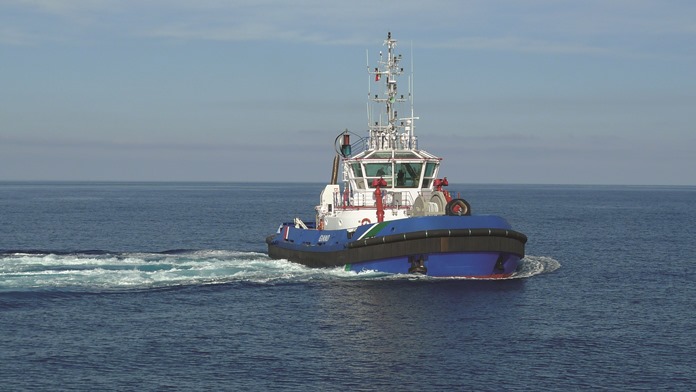 The first commercial voyage of a remote-controlled tug is due to take place in June, with the vessel then heading to Marseille, France, for ITS 2018 from 25 to 29 June.

Four years after the innovative Giano tug concept was unveiled at ITS 2014 Hamburg, the compact first-of-its-type is preparing to tow a cargo-carrying, 10,000dwt ocean barge on a 400nm voyage between ports. A full crew complement will be on board the tug, but much of the vessel’s operation en route will be carried out from an office in Naples, Italy.

For chief designer Dr Ugo Savona, the voyage will be the culmination of the three-phase project to bring his design to reality and the market as a ship-handling and escort tug he believes is more stable and more manoeuvrable than anything else that is currently operating.

The first phase saw Giano built and, in 2015, take to the water. Phase two has seen extensive testing and a succession of client tug masters, skippers and pilots spending time behind the controls – quickly, according to Savona, getting to grips with its operational simplicity.

The remote-controlled commercial voyage will be the third phase, relying on what Savona refers to as ‘small data’ – direct machine-to-machine connectivity by internet, with enhanced cyber security, rather than via third-party servers.

Immediately after arriving at the port at the end of the remote-control towing operation Giano will sail to Marseille where Purple Sea will arrange for delegates attending ITS to go on board.

Read the full story in the May/June issue of International Tug & OSV, published on 25 May.