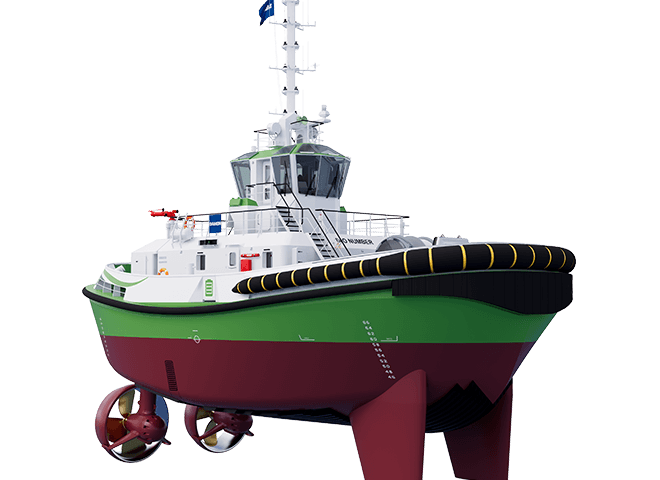 On 7th July, in Vietnam, Damen Song Cam Shipyard, together with joint venture partner Song Cam Shipyard hosted a keel-laying ceremony for the electric RSD-E Tug 2513 that Damen is building for the Ports of Auckland, New Zealand. The ceremony was attended by Her Excellency Ms. Wendy Matthews, the ambassador of New Zealand to Vietnam and Her Excellency Ms. Elsbeth Akkerman, the ambassador of the Netherlands to Vietnam. Representatives of the Ports of Auckland attended the ceremony remotely via digital communication.

In keeping with tradition, the ceremony included welding coins to the keel. On this occasion, it was decided to weld two New Zealand 20 cent-pieces – thereby marking the year 2020. The coin is a distinctive one in the Spanish flower shape. It features a portrait of Queen Elizabeth II on the obverse and, on the reverse, a Maori carving of Pukaki, a chief of the Ngāti Whakaue iwi (tribe). Using two coins allowed both the obverse and reverse sides of the coin to be displayed.

This is a notable milestone for a very notable vessel – the RSD-E Tug 2513 is the world’s first fully electric tug with 70 tonnes bollard pull. It will make an important contribution towards meeting Ports of Auckland’s goal of being a zero emissions operation by 2040. With 80% of electricity in the country already cleanly generated, the tug will complete a green energy cycle in the ports.

Joris van Tienen general director of Damen Song Cam Shipyard said, “We are very excited to make a start on the construction of this innovative vessel. We are also very proud to be maintaining our schedule during this challenging time when the coronavirus pandemic continues around the world. This is due to the enormous efforts our staff have gone to in order to ensure a safe working environment.”

A foundation of proven standards

Following a popular vote in which people were invited to select a name for the new vessel, the Ports of Auckland’s RSD-E Tug 2513 will be named Sparky. Over half of the 8,000 people who participated in the election voted for the name.

The RSD-E Tug 2513 is just one example of the highly efficient solutions Damen is building as it works towards its goal of becoming the world’s most sustainable shipbuilder. Other examples include the deliveries of fully electric ferries to Denmark, electric and hybrid ferries to Canada and an electric Cutter Suction Dredger. The shipbuilder, renowned for its successful series building philosophy, is applying standardisation and digital connectivity to the development of operationally excellent vessels fit for a sustainable maritime future.