Second tugboat from Med Marine to America in 2019 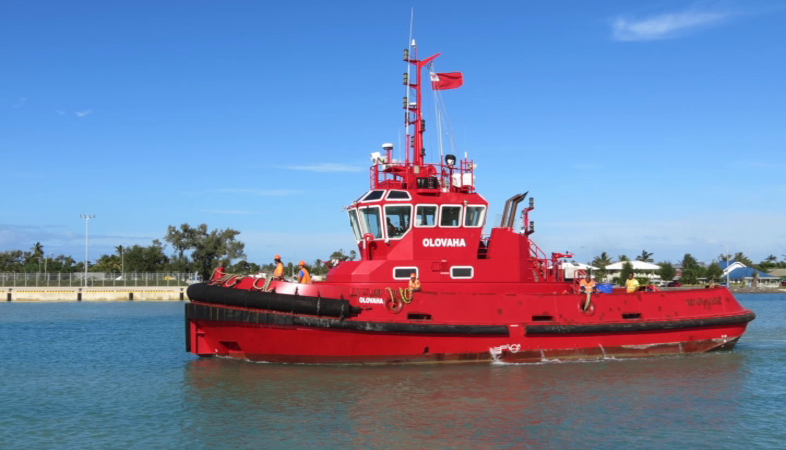 A second tugboat for Tonga, the MV Olovaha, was launched this morning by HM King Tupou VI and HM Queen Nanasipau’u at the domestic wharf terminal in Nuku’alofa.

The MV Olovaha is part of the Port Authority Tonga’s plan to upgrade the harbour and to provide the services and facilities that will attract more cruise ships and container ships to Tonga.

Dr Sione Ngongo Kioa, the Chairman of the Port Authority board, said the Port Authority decided to buy a second, bigger tugboat for Nuku’alofa. They identified a tugboat at Townsville, Australia, which was bought from Chinese ship builder in 2012.

Costing $2.1 million pa’anga, the purchase of the vessel was financed by the Ports Authority Tonga, with a 55% loan from the Bank of the South Pacific and 45% from its own funds.

The MV Olovaha brought from Australia to Tonga by a six-members Tongan crew, who left Townsville on 26 March and arrived in Nuku’alofa on 6 April.

Dr Kioa said that the Asian Development Bank was willing to finance a further development of Queen Salote Wharf to enable bigger container ships to land and off-load in the near future.

The Port Authority had presented a work plan to Cabinet, including an upgrading of public facilities on the Nuku’alofa waterfront.

The launch event was attended by the Prime Minister Hon. ‘Akilisi Pohiva, the Deputy Prime Minister Semisi Sika and some members of government, and invited guests.