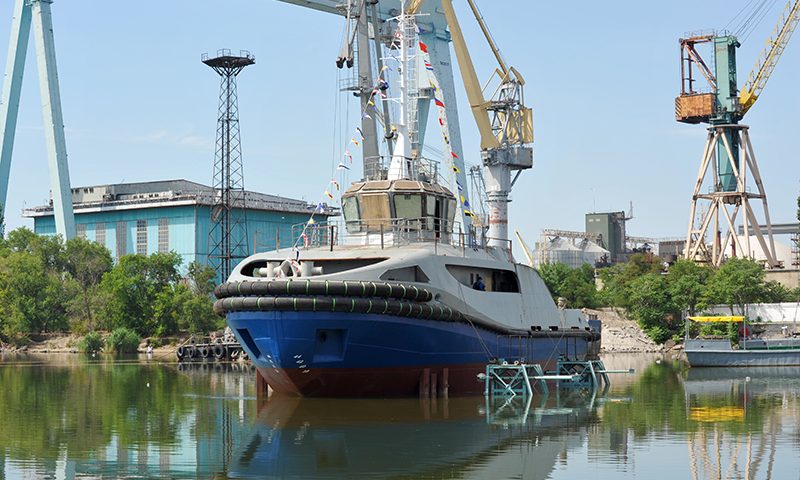 On July 10, NIBULON’s shipbuilders launched NIBULON 101, the second multipurpose seagoing tug of the T3500 project. According to NIBULON, it is intended for escorting foreign going vessels along the Buh-Dnipro-Lyman Channel (hereinafter BDLC), mooring vessels to the berths, escorting convoys of non-self-propelled vessels (from 2 to 4 units) along the BDLC, and escorting convoys along the channels during ice conditions in the navigation area in the Dnipro River and the Black Sea.

The vessel was launched during the working process because, as it has already been mentioned, NIBULON shipbuilding and repair yard has a heavy order book for several years ahead. The shipbuilding program is in full swing. The new vessels, namely POSS-115 project tugs, are being prepared for launching.

Despite harmonious lines and modern forms that are more likely to remind an elegant yacht, the T3500 project tugs are equipped according to the highest technological standard. On these tugs we have installed the equipment purchased from the leading world manufacturers, namely from MTU (Germany), Rolls-Royce (Finland), Volvo-Penta (Sweden) etc. These are multipurpose ice-breaking tugs capable of operating during ice conditions with a thickness of ice up to 60 cm. Thanks to special rudder propellers, tugs are very maneuverable. Taking into account such universal characteristics, vessels are capable of towing vessels with a displacement of 50-70 thousand tons and to ensure safe and comfortable escorting of vessels along the channels and mooring them to the berths. Thanks to two deluge gunscapable of discharging water stream of 375 m3 per hour (the length of water stream – 100 m), T3500 project tug is capable of extinguishing fire both on the vessel and on the shore.

In Ukraine, the last vessel of this class was launched 13 years ago. Only three such tugs are flying the Ukrainian flag, and they are used by private offshore companies. But our company constructs a modern Ukrainian towing fleet which will fly the Ukrainian flag; it will operate for the benefit of the country’s economy and will become an element of Ukraine’s independence from foreign fleet in terms of escorting vessels along the BDLC during ice conditions.

The first multipurpose T3500 project tug was launched at NIBULON shipbuilding and repair yard on May 23, 2018 with the participation of the President of Ukraine Petro Poroshenko. It was launched during solemn opening of the largest exhibitions of achievements and new developments in shipbuilding and water transport held for last decade.  More than 40 foreign and domestic companies participated in these exhibitions.