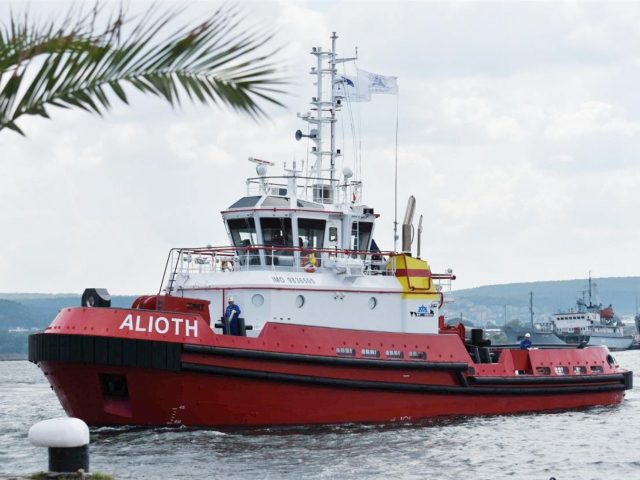 In end-June Bulgaria’s MTG-Dolphin delivered a second-in-series tug, named “ALIOTH“, to Navigation Maritime Bulgare (Navibulgar). The ship naming ceremony was held at the Port of Varna on the 29th of June.

This tug joins the fleet of the owner’s five tugboats and is the second tug built for Navibulgar, a Bulgarian ship owner with more than 30 bulk carriers. “ALIOTH“‘s sister ship, the first-in-series “ALCOR”, was delivered by MTG-Dolphin to Navibulgar in June 2017.

“ALIOTH” is named after the brightest star from the Ursa Major constellation. Alioth is listed among the navigational stars and so the tug “ALIOTH” will be helping the vessels in the ports of Varna and Bourgas make their way.

The second of three vessels to be built to the Robert Allan Ltd RAmparts 2700 design, “ALIOTH” is completely in line with the applicable rules and regulations of Bureau Veritas and will sail under a Bulgarian flag.

“ALIOTH” has an overall length of 27.6 m with a beam of 10m and a draft of 3.95 m. The main propulsion is comprised of two Caterpillar 3512C diesel engines, each with a capacity of 1800 hp, driving two rotating Veth VZ-1250A azipod drives, having 2,000mm diameter fixed pitch propellers.

First-class equipment makes “ALIOTH” capable of performing both port and sea towage, having unrestricted navigation class notation, and of manoeuvring even in hard conditions.