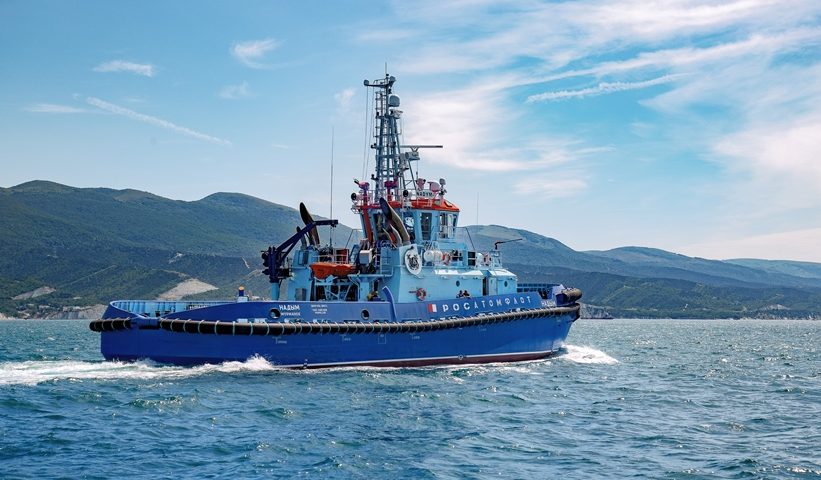 The national flag was raised on the tugboat “NADYM” owned by ATOMFLOT Federal State-Owned Unitary Enterprise (a Member of ROSATOM State-Owned Corporation) in Murmansk on June 29.

Our Enterprise has made an important step within the framework of  implementation of the project entitled “Portoflot”, says Mustafa Kashka, First Deputy Director General of ATOMFLOT Federal State-Owned Unitary Enterprise. The tugboats “Pur”, “Tambey” and “Yuribey” have been placed into commission within a fixed timeframe. The tug “NADYM” will sail off towards the Gulf of Ob in the nearest possible time where it will operate in the port of Sabetta.

On June 4 “NADYM”, an all-purpose deep-sea craft tug owned by ATOMFLOT Federal State-Owned Unitary Enterprise, left Novorossiysk heading for Murmansk. The vessel is named after the river flowing in the north of Western Siberia and disemboguing its waters into the Gulf of Ob of the Kara Sea.

The tugboat “NADYM” of the “Т3687” Project has ice class Arc 6. The vessel’s horsepower is 6.4 MW, open water speed is 13.5 knots, maximum draft is 6.71 m, length is 36 m, breadth is 13 m. The operational manning is 10 crewmembers. The vessel was built in Krasnodar Krai on a manufacturing site of Craneship Ltd. within the framework of the Portoflot Project. The tugboat is destined for providing a whole package of harbour services in the Gulf of Ob. In particular, any ice operations in a port and entrance passage, escort of any tankers for LNG shipping and freight, towing of any non-self-propelled vessels and floating structures, pilotage of vessels within the water area of any ports and berthing, any escort operations at a speed of up to 10 knots, fire fighting on any vessels and port facilities, participation in any oil spill response operations, as well as carriage of any deck cargos. The vessel’s technical characteristics allow year-round operations in the Gulf of Ob.

The PORTOFLOT Project was created by ROSATOMFLOT within the framework of an international project entitled “YAMAL LNG” to be implemented in the Arctic Zone of the Russian Federation. Building of harbour vessels that include a harbour icebreaker, two ice-breaking tugs and two tugs having an ice class. These vessels are destined for providing a package of services typical of harbour vessels till December 2040, with a possibility of extension of the validity of their contracts for 2 5-year periods for each vessel, accordingly.

At present Vyborg Shipbuilding Yard (of Vyborg, Leningrad region) continues construction of a harbour ice-breaker named “OB”. This vessel is expected to become the flagman of the PORTOFLOT Project.